It’s hard not to love chocolate. Its versatile nature makes it easy for any person to find a type they like, whether they prefer the creamy sweetness of milk chocolate or the bitter tang of dark chocolate. And because chocolate pairs so well with other ingredients like nuts and fruits, you can spend your whole life trying different varieties.

Loving chocolate isn’t exclusive to one country or culture. Wherever you go in the world, you can find chocolate in some form or another. In addition to traditional chocolate bars and candies, many countries have found fun and unique ways to consume chocolate. Some creative chocolate uses have cultural significance, and some just taste delicious.

Read on to learn how people in a few different countries enjoy chocolate.

Mole was originally developed in Mexico as a chili-based sauce served with various meats. The word “mole” initially meant “mix,” but now the word almost always refers only to the dish. Over time, as Mexico interacted with other countries and discovered new foods, mole has become more complex, gaining ingredients and spawning local specialties.

Modern Mexican mole includes chocolate as a way to keep the spicy peppers from overwhelming the other flavors. It is an essential ingredient in a sauce primarily composed of chilies, fruits, nuts, and spices. Outside of Mexico, chocolate can occasionally take center stage.

A popular Guatemalan dessert involves creating a chocolate-heavy mole sauce that also includes chilies, tomatoes, and pumpkin seeds. The rich sauce is served over fried plantains and topped with sesame seeds. North American recipes sometimes use chocolate mole sauce in the traditional way, serving it with meat, proving that chocolate doesn’t just work as a dessert.

This traditional French treat is commonly served around Christmas time and was originally inspired by Christian symbolism. The small chocolate disk was traditionally topped by specific fruits and nuts meant to represent the four monastic orders of the Catholic Church. Raisins represented the Dominicans, hazelnut the Augustinians, dried figs the Franciscans, and almond the Carmelites.

Nowadays, mendicants can be topped with anything, allowing people to create treats that perfectly suit their tastes or the tastes of the person receiving them. Popular toppings beyond nuts and fruits include seeds, fruit peels, and pretzels.

Marketed as “Australia’s Favorite Cookie,” the Tim Tam is a chocolate lover’s dream because it has three distinct chocolate layers. Two chocolate biscuits sandwich a chocolate cream filling, and the whole thing is covered in pure milk chocolate. Fans can either eat the cookies on their own or participate in a great Australian pastime: the Tim Tam Slam.

The Tim Tam Slam requires participants to choose a beverage, typically something like hot chocolate, chocolate milk or coffee. They then bite off the opposite corners at each end of the cookie, cutting through the biscuit and exposing the creamy center. Using the biscuit as a straw, they drink the beverage through the cream. The cream enhances the drink, and the drink softens the cookie, improving the flavor profile of both.

Chocolate ice cream bars are a summer staple in many countries, but few taste quite like the Miša of the Czech Republic. When you crunch through the hard chocolate outer layer, you may expect to taste traditional vanilla ice cream, but instead, you’re treated to a mouthful of a slightly acidic cheese-based ice cream.

The cheese, known as quark, is common in Czech desserts. The ice cream bar was introduced over 50 years ago and has remained essentially unchanged. Many Czechs remember Miša as a staple of childhood summers, and the ice cream does triple duty as a delicious treat, a cultural staple, and a nostalgic symbol.

In Japan, Valentine’s Day is an important holiday, especially if you’re a woman. Since the introduction of Valentine’s Day in 1936, the holiday has traditionally called for women to give chocolate to the men in their lives. There are two different categories of chocolate: giri choco, or obligation chocolate, and honmei choco, or true feeling chocolate.

Women give giri choco to coworkers and male friends, and it’s generally cheaper chocolate of name brand varieties. Honmei choco is reserved for boyfriends, husbands, or anyone the girl or woman may be interested in. Honmei choco is expensive and personalized, and many women choose to make it themselves.

Men return the favor a month after Valentine’s Day, on a holiday known as White Day. In keeping with the name, men give white chocolates, marshmallows, or white jewelry to the women who gave them either obligation chocolate or true feeling chocolate.

Part of the fun of visiting a new country is enjoying their unique cuisine and treats. And, it’s possible to find many international chocolate recipes online if you want to experience the flavor without needing to travel. Or, if you’re craving high-quality, delicious chocolates with a variety of flavors, coatings, and fillings delivered right to your door, order a box of Abdallah chocolates! 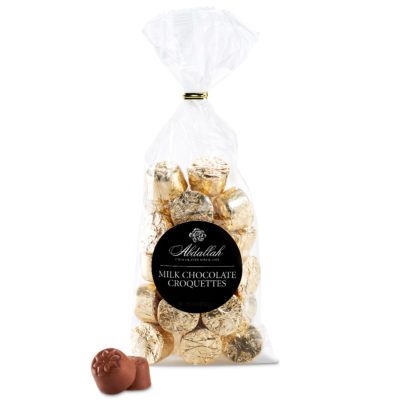